By adhouseadmin 28. May 2019 November 20th, 2019 No Comments
Two Mühlviertler pave the way for the new world champion

A sheikh has called for help: Herbert Oberreiter and Mario Furtlehner from vehicle builder Holzmann from Königswiesen/Ennsdorf clean the Formula 1 track in Abu Dhabi.

Mario Furtlehner from Kaltenberg and Herbert Oberreiter from Pierbach (both in the district of Freistadt) made the rounds on the Formula One track in Abu Dhabi in a giant cleaning truck yesterday at 1 km / h. With up to 315 km / h on Sunday in the last race of the season, the Mercedes stable colleagues Lewis Hamilton and Nico Rosberg make up the world title.

Closer than the VIP guests and wealthy sheiks, the two employees of the company Holzmann Fahrzeugbau GmbH will participate in the race – and intervene if necessary, so that everything runs smoothly.

A work under high pressure

If there is an accident or contamination at the Yas Marina Circuit, then “Holzmann” arrives with the special truck together with a high-pressure water system (300 bar) and high-performance blower.

Outflowing oil is absorbed, for example, and the route is cleaned at high pressure. “We are on standby during the race and can move freely around the ring,” says Furtlehner. “Alone after training there are massive abrasions on the track, often fist-sized rubbers, which is dangerous – if they are whirled up, they could shoot the next one at the helm,” explains Wolfgang Holzmann.

It was a call for help last minute, which reached the company Holzmann from the United Arab Emirates. The cleaning device is stationed in Abu Dhabi – but the responsible person had disappeared without a trace. “He just left the car, but hardly anyone can handle it.” So the vehicle manufacturer got a call from his well-known sheikh. Furtlehner and Oberreiter sat in the plane a few hours later.

“The first day was pure horror, just stress,” says Furtlehner, “we had to get the vehicle up and running again.” The claim is high: “Everything has to shine and be perfect for high society from all over the world.” For the two Mühlviertler this is no ordinary business trip. Usually, the cleaning machines in airports or large parking lots in use. “My four children are big fans of Sebastian Vettel, an autograph of him would be great,” says the 36-year-old Furtlehner. He will try to give the future Ferrari driver a clean finish – if not from Red Bull, then from the race track in Abu Dhabi. 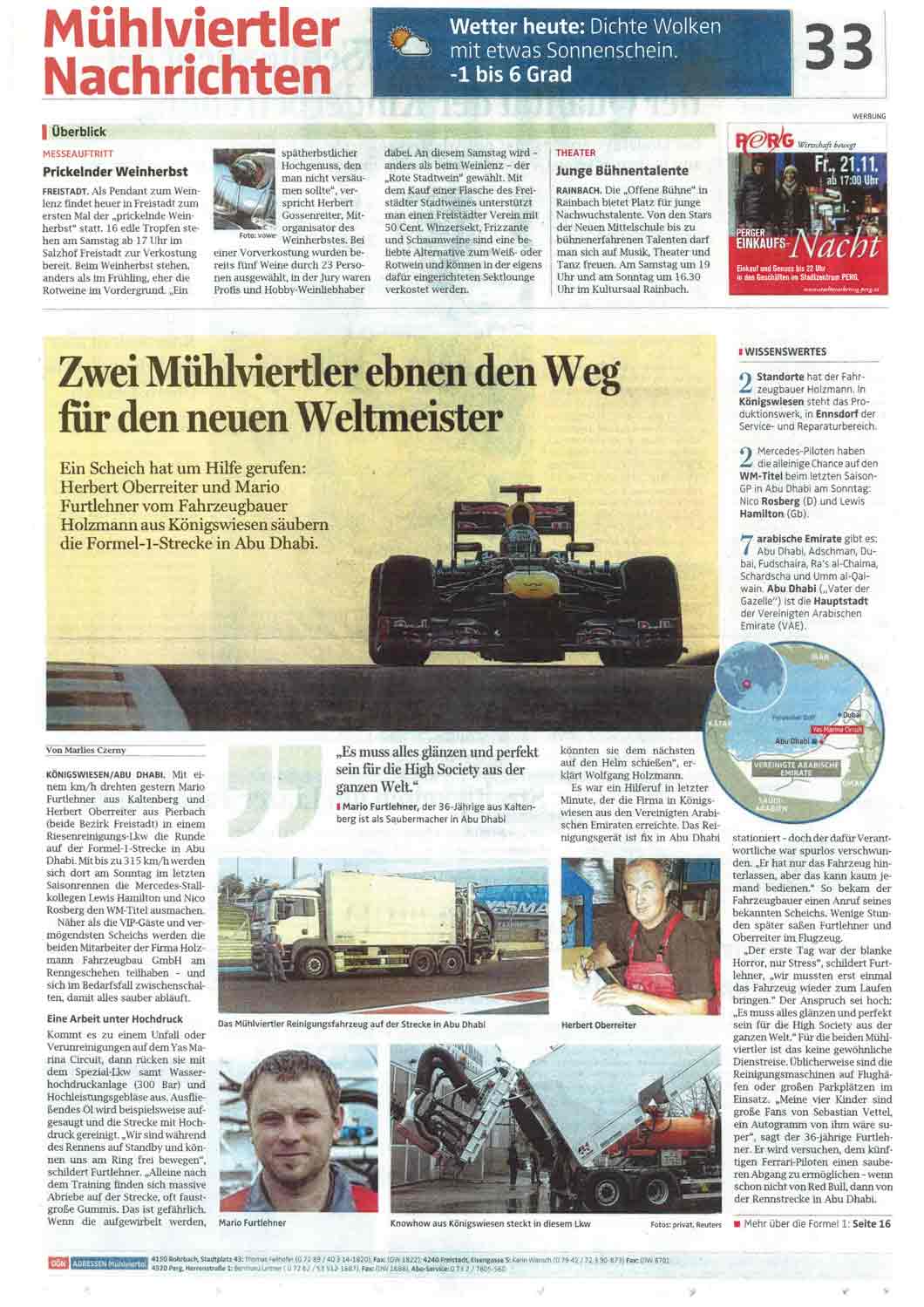